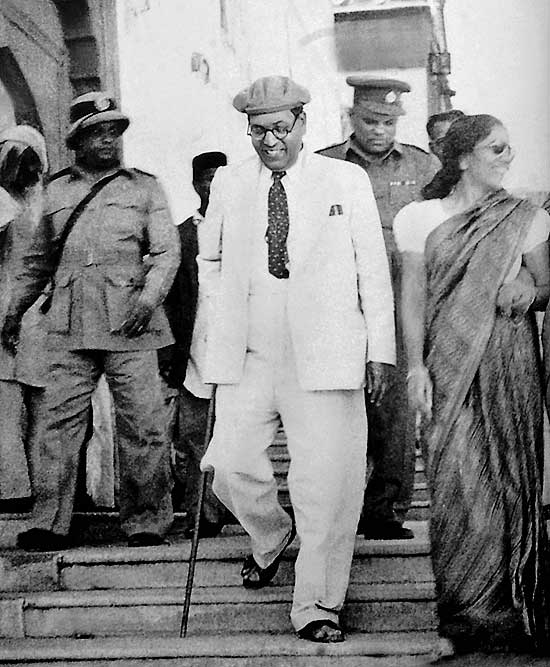 The Great Mission in

Making the people to stand to fight against social slavery

– He created awareness of slavery in the common people and made them to think and revolt against in.

– He triggered the flame of self-respect and if to say in his own word, he inspired to protect human dignity and to live with self-respect, and even die for moral values.

– When I think of all the phases of his struggle, I understand that he was the force that caused the rebirth of 6 ½ crore people of the total population of that time. For rebirth, one has to transmigrate from on birth to another. But the rebirth that Dr. Babasaheb Ambedkar enabled was realized in the living life only. Such a work was done by Lord Buddha before two and half thousand years in ancient India and in modem indern India, to a large extent, has been done by Swami Vivekanand, Mahatma Gandhi and Dr. Hedgewar.

– Therefore he never was imprisoned.

– During Quit India Movement of 1942, he entered the viceroy’s Council and became a minister for labour.

– He appealed to the untouchables to be indifferent to the Quit India Movement and even opposed it.

Analysis of the Hindu Social Order

Freedom not only from Foreign Rule, but also form social Tyranny

Millions of lives are lost in other countries, but none here

His Social Revolution was entirely peaceful

‘What are the values of wich the new state built?’

It is quite obvious that the proposal for Pakistan is designed to win over the Muslim League. How do the proposals deal with the Depressed Classes?  To put it shortly, they are bound hand and foot handed over to the caste Hindus. They offer them nothing, but stone instead of bread. For the Constituent Assembly is nothing but a betrayal of the Depressed Classes…If they are there, they cannot have a free, independent decisive vote. In the first place, the representative of the Depressed Classes will be in a hopeless minority. In the second place, all decisions of the Constituent Assembly are not required by a unanimous vote.

Not the slightest doubt about the Cultural Unity of India

It may be granted that there has not been a through amalgamation of the various stocks that make up the people of India, & to a traveler from within the boundaries of India the East presents a marked contrast in physique& even in colour to the west, as does the South to the North. But amalgamation can never be the sole criterion of homogeneity as predicated of any people. Ethnically all people are heterogeneous. It is the unity of culture that is the basis of homogeneity. Taking this for granted, I venture to say that there is no country that can rival the Indian Peninsula with respect to the unity of its culture. It has not only a geographic unity, but it has over & above all a deeper & a much more fundamental unity-the indubitable cultural unity that covers the land from and to end.

This code applies (a) to all persosn professing the Hindu religion in any of its forms or development, including, Virashaivas or Lingayats& member of the Brahmo the Prarthana or the AaryaSamaj; (b) to any person who is Buddhist, Jaina or Sikh by religion (c) (i) to any child, legitimate, both of whose parents are Hindus within the meaning of this section (ii) to any child, legitimate or illegitimate, one of whose parents is a Hindu within the meaning of his section; provided that such child is brought up as a  member of the community group or family to which such parent belongs or belonged’ & (d)to a convert to the Health religion. This code also applies to any other person, who is not a Muslim, Christian, Parsi or Jew by religion.

Application of Hindu code to the Sikhs, Buddhists & Jains was a Historical development & it would be too late sociologically to object to it. When the Buddha differed from the Vedic Brahmins, He did so only in matters of creed & left Hindu legal framework intact. He did not propound a separate law for his followers. The same was the case with Mahavir& the ten Sikh Gurus.

The Buddha, The Jain, The Sikh also come in the purview of Hindu Code Bill

Babasaheb realized the uniqueness of the land of ours

He includes in the Hindu Code Bill the Buddha, the Jain, Sikh and all those groups of people who do not belong to Christian, Muslim, Parsi or Jew religion. It is too late to take objection to it on social grounds now. When Buddha established an alternative to Brahminism, he never objected to the Hindu law. Nor he advocated an alternative system of law for his followers. The same is the truth about the ten Gurus of the Sikh and the Mahavir Jain.

If a saving clause were introduced into the constitution, it would disable legislature in India from enacting any social measure whatsoever. The religious conceptions in this country are so vast that they cover every aspect of life from birth to death. There is nothing which is not religious and if personal law is to be saved, I am sure about it that in social matters we will come to a standstill. I do not think that it is possible to accept a position of that sort. In Europe, there is Christianity but Christianity does not mean that the Christians all over the world or in any part of Europe where they live shall have a uniform inheritance law. No such thing exists. I personally do not understand that religion should be given this vast expensive jurisdiction so as to cover the whole of life and to prevent the legislature from encroaching upon that field. After all, what

India’s geographical position just fitted her to be the early cradle of civilization. Nature has given her that has been the envy of many of tribal people who are ever in search of a secure abode to develop their capacity & make the most of nature’s gifts. Severed from China & Tiber on the north by the Tenasserim& on the west from Afghanistan by the (Karakoram) (Hindukush) ranges the entire peninsula forms a world in minitature in itself-(formed) by strong natural defences- “the mountains” forming a wall on the North-West & the Sea…a moat on all other sides.

This “inverted triangle” conserves the most varied and most abundant of natural resources. Animal life is not only abundant in British India, but it is remarkable varied. The number of kinds of animals inhabiting India & its dependencies is very Large, far surpassing, for instance, that of the species found in the whole of Europe, although the superficial area of Europe exceeds that of the Indian empire by about one-half” Equality is her rich diversity of flora & fauna & her climate that makes possible the existence of such variegated animal life. The richness of vegetable life is immemorial combined to bestow upon her the economic self-sufficiency, which has been the privilege of few nations on the face of this planet today.

His was the first step for Construction of Water Dams

Nationality is a feeling ofA corporate sentiment of oneness

I was glad that India was separated from Pakistan. I was the philosopher so to say of Pakistan. I advocated partition because I felt that it was only by partition that Hindus would not only be independent but free. If India and Pakistan had remained united in one State. Hindus though independent would have been at the mercy of Muslims. A merely independent India would not have been a free India from the point of Hindus.

The reasons for his resignation from the Government

A second capital is needed and it should be in South

Fraternity is the most essential thing

An innovative definition to Democracy

Everyone should have equal access…That is democracy

Reservation – The way for winder representation

All leaders realize the expertise of Ambedkar

A Letter of Dr. Rajendra Prasad

The key role played by Dr. Ambedkar in the making of Constitution

His word of caution at the crucial hour

Wherein the said territories, whether with their present boundaries or with such others as may be determined by the Constituent Assembly and there after according to the law of the constructions, shall possess and retain the status of autonomous units, together with residuary power and exercise all power and functions of government and administration.

I know today we are divided politically, socially, and economically. We are a group of warring camps and I may go even to the extent of confessing that I am probably one of the leaders of such a camp. But, Sir, with all this, I am quite convinced that given time and circumstance nothing in the world will prevent this country from becoming one. (Applause): With all our castes and creeds I have not the slightest hesitation that we shall in some form be a united people (cheers), I have no hesitation in saying that notwithstanding the agitation of the Muslim League for partition of India someday, enough light would dawn upon the Muslims themselves and they too will begin to think that a United India is better even for them (Loud cheers and applause)

What does paragraph 3 say? Paragraph 3 says that in this country there shall be two different sets of polity, one at the bottom, autonomous Provinces or the States or such other areas as care to join a United India. These autonomous units will have full power. They will have also residuary powers. At the top, over the Provincial units, there will be a Union Government, having certain subjects for legislation, for execution and for administration. As I read this part of the Resolution, I do not find any reference to the idea of grouping, an intermediate structure between the Union on the one hand and the province on the other. In Reading this para, in the light of the provinces on the other. Reading this para, in the light of the Cabinet Mission’s Statement or reading it even the light of the Resolution passed by the Congress at its Wardha Session, I must confess that I am a great idea, surprise at the absence of any reference to the idea of grouping of the provinces. So far as I am personally concerned, I do not like the idea of grouping (here, hear) I like a strong united Centre, (hear, hear) much stronger than the Centre we had created under the Government of India Act of 1935. But, Sir, these opinions, these wishes have no bearing on the situation at all. We have travelled a long road. The Congress Party, for reasons best known to itself consented, if I may use that expression, to the dismantling of a strong centre which had been created in this country as a result of 150 years of administration and which I must say, was to me a matter of great admiration and respect and refuge.

‘Strong Centre’ indispensable for this Nation