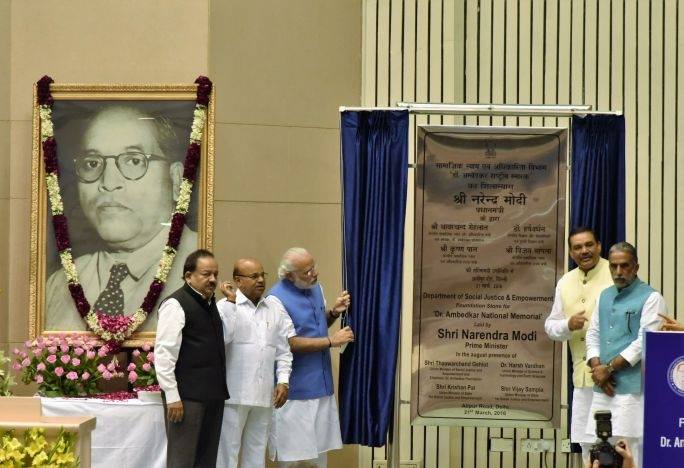 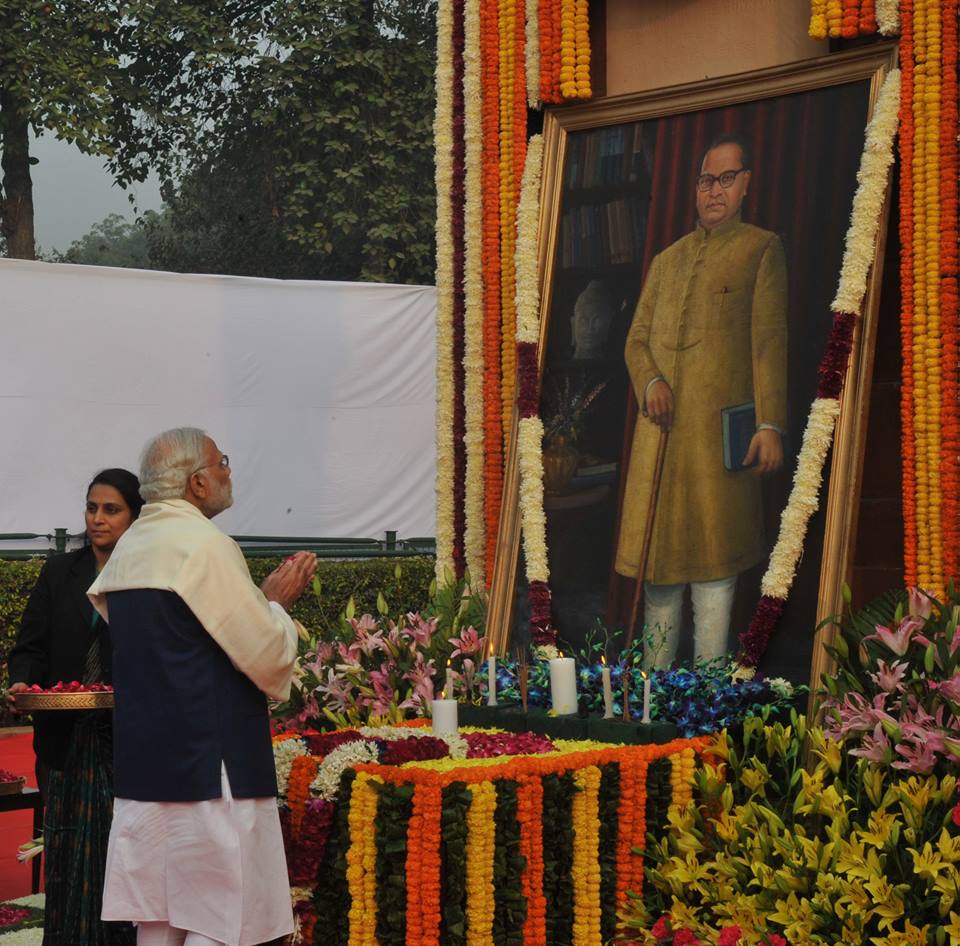 Speaking on the occasion, the Prime Minister expressed confidence that the Centre would play a key role in the dissemination of Dr. Ambedkar’s teachings and vision. Noting that the Dr. Ambedkar International Centre for Socio Economic Transformation is also part of this project, the Prime Minister said that this will be an important centre for research on social and economic issues. He said the centre would function as a think-tank for inclusive growth, and related socio-economic matters.

The Prime Minister said that thought-leaders and visionaries have shaped the direction of our country, at different points in time. He said the country is indebted to Baba Saheb, for his contributions to nation-building. He said the Union Government wants more and more people, and especially the youth, to learn about his vision and ideas. That is why, he added, that important places related to Dr. Ambedkar’s life have been developed as centres of pilgrimage. In this context, he mentioned the sites at Alipur in Delhi; Mhow in Madhya Pradesh; Indu Mill in Mumbai; Deeksha Bhumi in Nagpur; and the house in London. He said that this ‘Panchteerth’ is the today’s generation’s way of paying homage to Dr. Ambedkar. He said that the BHIM App for digital transactions, is the Union Government’s homage to the economic vision of Dr. Ambedkar.

Quoting from Dr. Ambedkar’s address to the Constituent Assembly in December 1946, the Prime Minister said despite his struggles, Dr. Ambedkar had an inspirational vision for the nation to overcome its 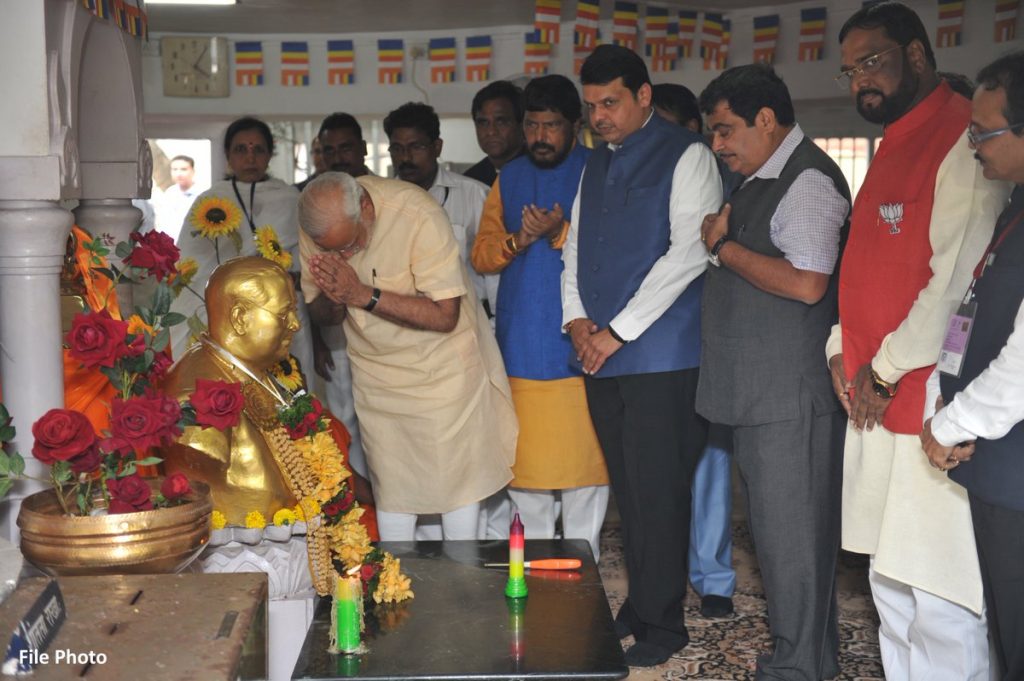 problems. He said that we have still not been able to fulfil the vision of Dr. Ambedkar. He said today’s generation has the capability and the potential to eradicate social evils.

The Prime Minister recalled Dr. Ambedkar’s words, that we should make our political democracy, a social democracy as well. He said that over the last three to three and a half years, the Union Government has worked towards fulfilling this vision of social democracy. In this context, he mentioned initiatives taken by the Government such as Jan Dhan Yojana, Ujjwala Yojana, Swachh Bharat Mission, insurance schemes, Pradhan Mantri Awas Yojana, and the recently launched Saubhagya Yojana. He said the Union Government is making every effort to complete schemes and projects within their intended duration, and the Dr. Ambedkar International Centre represents one illustration of this. He spoke at length about other schemes including distribution of soil health cards, Mission Indradhanush and progress towards rural electrification targets, to show the speed and commitment of the Union Government in implementing public welfare initiatives. The Prime Minister also mentioned the Stand-Up India scheme for generating self-employment.

The Prime Minister asserted that his call of “New India”, is the India which Dr. Ambedkar envisioned, where everyone has equal opportunity and rights, free from caste oppression, and progressing through the strength of technology. He exhorted everyone to work towards fulfilling the vision of Babasaheb Ambedkar; and hoped that we would be able to accomplish it by 2022.

Shri Thaawarchand Gehlot in his address said that the construction of Dr. Ambedkar International Centre is an historic achievement as it has been completed before scheduled time. He congratulated Dr. Ambedkar Foundation and all those associated with the centre for it. He said that under the guidance of the Prime Minister, the Ministry of Social Justice and Empowerment has done remarkably well during past three years.

Dr. Ambedkar International Centre (DAIC) has been constructed at an estimated cost of Rs. 195 crores. Scheduled for completion in January, 2018, the project has been completed well in advance of the scheduled date of completion. The foundation stone for DAIC was laid by the Prime Minister of India on 20 April, 2015.

DAIC is built in an area of 3.25 acres with a total built up area of 117830.59 sq.ft. In order to develop DAIC into a Centre of Excellence, it has been equipped with an extensive library, three state-of-art auditoriums, three conference halls with varying seating capacities and exhibition areas.

The architecture of DAIC is a mix of modern and traditional styles with the Sanchi Stupa Toran as the main facade of the Centre in keeping with Dr. Ambedkar’s love for Buddhism. Red sandstone has been used for the Chaitya Arch and the freizes in the interiors. An eight foot stone statue of Buddha in Dhyana Mudra posture is placed in the open area. A standing statue of Dr. Ambedkar is placed opposite to the Chaitya Arch and statue of Dr. Ambedkar in a sitting posture is in the Atrium. The building is also unique in having a 25 metre high Ashoka pillar made of 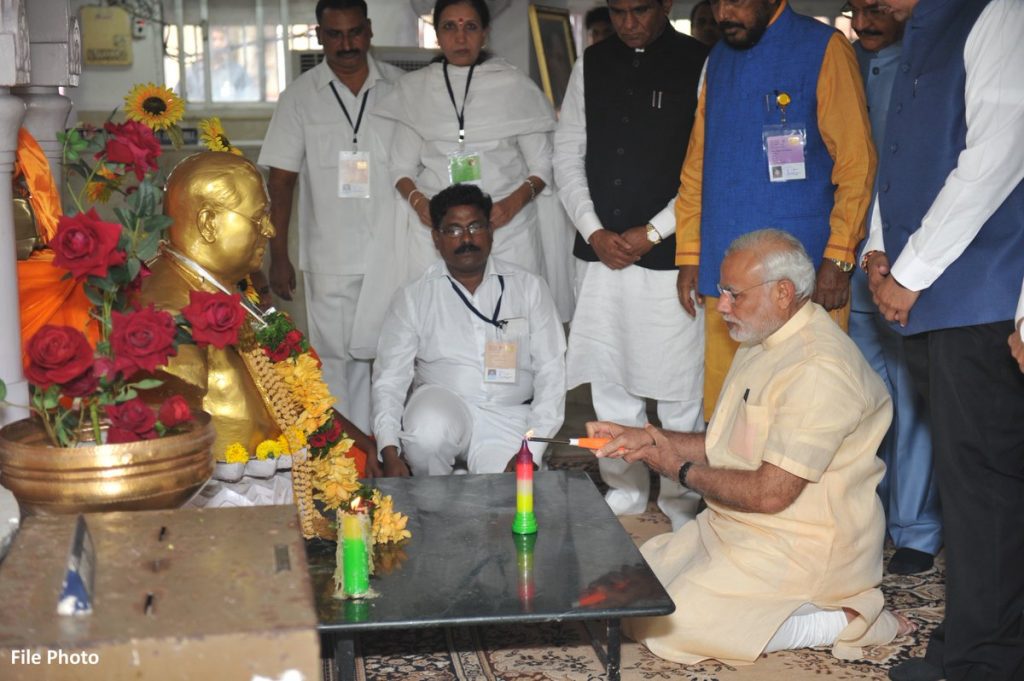 bronze placed strategically in the western corner of the building, open to public view.

The central dome of the building is of transparent material with 24 spokes representing the National Flag. The transparent nature brings in natural light through the day, thereby saving on power costs. The e-library will have access to international libraries. Scholars, researchers a

nd students can access approximately two lakh books and 70,000 journals of both national and international libraries. The library will also have a Braille Section for the visually impaired.

DAIC houses the Dr. Ambedkar International Centre for Socio-Economic Transformation (DAICSET) which is a Centre of Excellence for research in the field of social and economic studies. The DAICSET is a think-tank dealing with socio-economic issues with focus on inclusive growth and development. The Centre has consulting Wing and a Media Wing. The Centre would propose field interventions, take up consultancies, provide research reports, policy briefs and conduct workshops and conferences.

The life and teaching of Dr. B.R. Ambedkar form the pivotal point around which the conceptual base for the ‘Centre’ was developed. The building form and design uses transparency, inclusiveness and symbolism to express the essence of democracy and equality through architecture. Special emphasis has been laid down for the incorporation of the persona of Dr. Ambedkar in the structure. The stone clad façade on this modern edifice reflects the strength, firm determination and exemplary resoluteness; the inspiring traits of Dr. Ambedkar’s personality. It is also embedded with the subtle elements of Buddhist Architecture reminding us of the eternal values of compassion, universal brotherhood and equality among all, the corner stone of the philosophy of Dr. Ambedkar

Felt extremely blessed when I prayed at Chaitya Bhoomi in Mumbai. Sharing some pictures from that visit. pic.twitter.com/mR3cz3JMtY

Dr. Ambedkar’s vision of fraternity finds its eloquent expression in the environment friendliness features of the building by integrating energy efficient principles in the building design. The building has been envisioned as a world class institution of national importance dedicated to the multi-disciplinary study of the subjects which Dr. Ambedkar dealt with in his life time and to afford and promote human rights, equality and upliftment of society.